Happy New Year! I wish I could say that 2014 was a stellar year for my knitting, but honestly for much of the year my heart just wasn’t in it. I did do a little bit, however, and I am feeling much better about knitting in general after Christmas knitting and finishing a few things. All of the information for the pictured finished objects can be found on my Ravelry page, of course.

Not pictured is the stack of dish towels I started back in June as a kind of motivation to keep me knitting (and also to use up a bunch of scraps) which actually worked haha! I made 4 since I created the project on Ravelry and I’m probably just going to keep the project going to see how many I can make. It’s a fun pattern, quick to knit up and very portable, but my favorite part is since you are knitting in wedges, it has a lot of stopping points along the way so you can put it down any time, or decide, like often I did, to knit just one more section.

Also not pictured is the Teeny Tiny Santa I made for T’s tree this year, for which I somehow completely neglected to create a Ravelry page or even take a picture! You’ll have to rest assured it is exactly as cute as the one I made back in 2011.

Happy New Year to one and all! Look at me, starting off 2014 with a blog post. 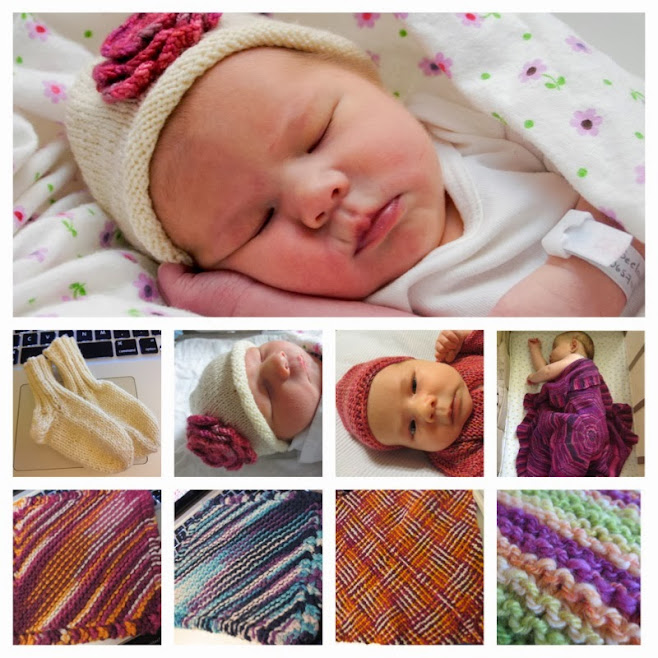 2013 was a slow year for knitting. I had a pretty rough pregnancy and then I was busy with my most important FO. Besides, now that we live in Florida, my enthusiasm for woolen things has waned somewhat. I have so much wool. *sigh* I did manage to finish, well, cast off in any case, that shawl I’d been working on for forever. It makes a pretty decent baby blanket, if I do say so myself. I’m hoping to get back into knitting/crafting this year, though, and maybe even start blogging regularly again! Wouldn’t that be something!

I have been trying, for the last few Thanksgivings, to find a decent pumpkin pie recipe that will work with all of our food allergies. I found a pretty good recipe for the filling, but an even serviceable pie crust has remained an elusive quarry, until now. The two recipes I riffed off of can be found here and here. Here’s my version:

160 grams gluten-free all-purpose flour mix (usually I use Bob’s Red Mill, but right now I have a mix I’ve been working with that has amaranth, sorghum, arrowroot starch, and potato starch. It worked great)

Combine the flours. You can use a sifter, or put them all in a bowl and whisk them together like I did. Then I whisked in the salt.

Cream the coconut oil and the sugar. I used my stand mixer, but you can use a hand mixer or a spoon. Whatever works best for you.

Add the egg, and some of the flour, mixing to combine. Then add the remaining flour. Don’t forget to scrape your damn bowl!

What I ended up with at this point was exactly like gluten-full pie crust after you cut the fat into the flour. I split this crumbly mixture into 2 separate bowls (using my kitchen scale) and into each I added enough ice water (a little at a time) to form it into a ball. There is no reason you couldn’t do this before dividing it in half. Roll each half into a 9″ circle between sheets of plastic wrap and then move it to a cookie sheet and refrigerate for at least an hour. NO CHEATING.

When you’re ready, get your sheets of dough out of the refrigerator and, if they are stiff (mine were like planks), allow them to rest until they are pliable before transferring them to your pie plates. If you get any cracks, just pinch the edges back together. Prick with a fork before baking (something I almost always forget to do!)

Pumpkin Pie Filling (makes enough for one gluten/dairy/soy free-pie, double if you want to make 2)

1/2 tsp ginger (I use the dehydrated whole ginger root from here and grate it into the sugars with my Microplane.)

1/4 tsp nutmeg (I use whole nutmeg and grate it with the Microplane.)

1 cup canned coconut milk (I use the full fat kind, but “lite” will work fine too)

Whisk together the sugars, spices, and salt in the bowl of your stand mixer. Add eggs, pumpkin, and vanilla, and coconut milk. Mix on medium until smooth.

Pour into your prepared (unbaked) pie crusts and bake at 425° for 15 minutes. Reduce heat to 350° and continue baking for 50-60 minutes, or until a knife inserted into the center comes out clean. It will probably look a little wibbly-wobbly in the center, but it will set as it cools. Let it cool for at least 2 hours. NO CHEATING.

OMFG THIS PIE IS FUCKING AWESOME. This is the first gluten-free pie crust recipe I have found that actually works the same way as a gluten-full crust. I was able to roll it out and get it into the pan without it being too sticky and it didn’t crumble to dust when I cut and served the pie. I feel like I can actually make a covered pie now! I can make pocket pies! I am ridiculously, obscenely, excited. And the filling is AMAZEBALLS. Creamy, custardy, smooth, and perfectly pumpkiny. OM NOM NOM NOM NOM.

One final note, the egg in the pie crust makes it more susceptible to burning, so if you have (or can get) a pie crust shield, I highly recommend it. Or not. I mean. Pie crust that’s a bit dark on the edges never hurt anyone. Besides, you’re not fucking Martha Stewart so stop Instagraming that shit and eat it.

Although, to be fair, this photo is at least a little better than anything Martha Stewart took without a food stylist.

I thought this was interesting, although I am sad that I only hit 58 posts this year. After such a strong start too. I’m hoping to be more blog-productive in 2013. Happy New Year, y’all!

Hope you had a wonderful morning full of surprises!

A few years ago, we figured out that the kids and I all had various food allergies and intolerances. Isaac’s allergies were especially bad since they included peanut and soy. That Halloween we took the boys trick or treating anyway, figuring that we would be able to pick out the candy they COULD eat and they would have fun anyway. Except that night it was POURING rain. We went house to house anyway, like good little candy extortionists, in our costumes and raincoats, and collected a couple of sackfuls of candy. Then we went home to sort. You guys, it was so sad. Of all the candy we were given, there were only a few pieces the boys could eat. Everything else had soy. Or peanuts. Or wheat. It was an incredibly disappointing and miserable evening.

After that we didn’t much feel like trick or treating anymore, so instead we had to come up with a way to celebrate Halloween that didn’t involve trick or treats. I spent a lot of time thinking about what the kids liked the most about Halloween, aside from the going house to house. Costumes, candy, pumpkin carving. And so that’s what we do, except I added staying up late and watching movies. Here’s what our Halloween looked like tonight.

We had Frankenbeans for dinner:

And then pumpkins were carved:

Then we had cupcakes (instead of candy this year because of Isaac’s braces):

And now we are staying up late watching movies. Right now we are watching Megamind. The kids are lolling about in their costumes, sugared up (as they are meant to be on Halloween night). I admit to missing the trick or treating, a little, and I’m sure the kids do too, but it’s been a great evening, relaxing and fun, which we have spent together. And I wouldn’t trade that for anything.

Wow, Day 5 already! I had a good day today, finally cracking into that gorgeous braid from Woolgaltherings. OMG I LOVE THESE COLORS!!

I have quite a bit more on the bobbin now, but it’s too late to get a good photo. I spun a lot while we are at the park waiting for the town fireworks, which were awesome, btw. How was your 4th of July?

Happy Star Wars Day, everyone! Here’s a question: what if Episode One was actually good? Like, really good? Well, BelatedMedia has some ideas. Check them out:

May the force be with you!

1. This morning I woke from a dream where I was frantically trying to knit a sharktopus for a boy in a wheelchair who desperately wanted one, but no matter how many stitches I knitted, I was never any closer to finishing it.

2. I have a cardiac stress test today. I’m a little stressed that I have to drive over to the testing place in the snow. I wonder if that will affect my test? Also, I did not know we were supposed to have a snow storm today and so did not get to do any PANIC shopping. Even though we have plenty of food in the house, I am stressed about it. I would call to reschedule my test, but I’ve already rescheduled it once and I just want to get it over with.

3. I’ve been working on some orange socks to use up the last of the 2nd hank of STR from Catkin.

4. Speaking of which, check out the nifty thingamabob my husband got for us to use on our iPhones:

Essentially, it’s a rubber band with a phone-sized lens in the middle. You put it around your iPhone, line up the lens with your camera and it makes it so you can take cool macro photos with your iPhone! Check it out:

4. Hubs and I finally got through all of Downton Abbey. OMG YOU GUYS HAVE YOU SEEN THIS SHOW? I know, I’m a little late to the party. If you are even later to the party than I was, you can check out the whole first season on Netflix streaming. PBS has some (but not all) second season episodes available as well. I’m not sure how long they will be legally available online, though, so you better clear your schedule and make plans to not sleep for a couple of days to get through them all. Or become a pirate. I suppose that’s an option as well. Arr!

Last minute tree ornament before I pack up the holidays.
Happy New Year! I made a lot of dishcloths in 2021. Everything else was gifted away ❤️ In 2022, I really would like to finish some of the things I have in deep hibernation, including a lace shawl and a sweater for yours truly. What did your knitting Year look like?
Wee mittens for a special little friend 🌈🌈